Data Stories Of The Week #17

The Art of Transforming Data into Great Stories

While DSOTW usually collects visualisations on diverse topics, this issue has a single focus: The recent Bundestagswahl (BTW) – the German federal elections that took place on September 24th.

The webkid bloggers have already put together a very good German Election Dataviz Recap, and there is no need to remix that post. However, there were more interesting data-driven approaches concerning the BTW, some of them getting less attention than they deserved. 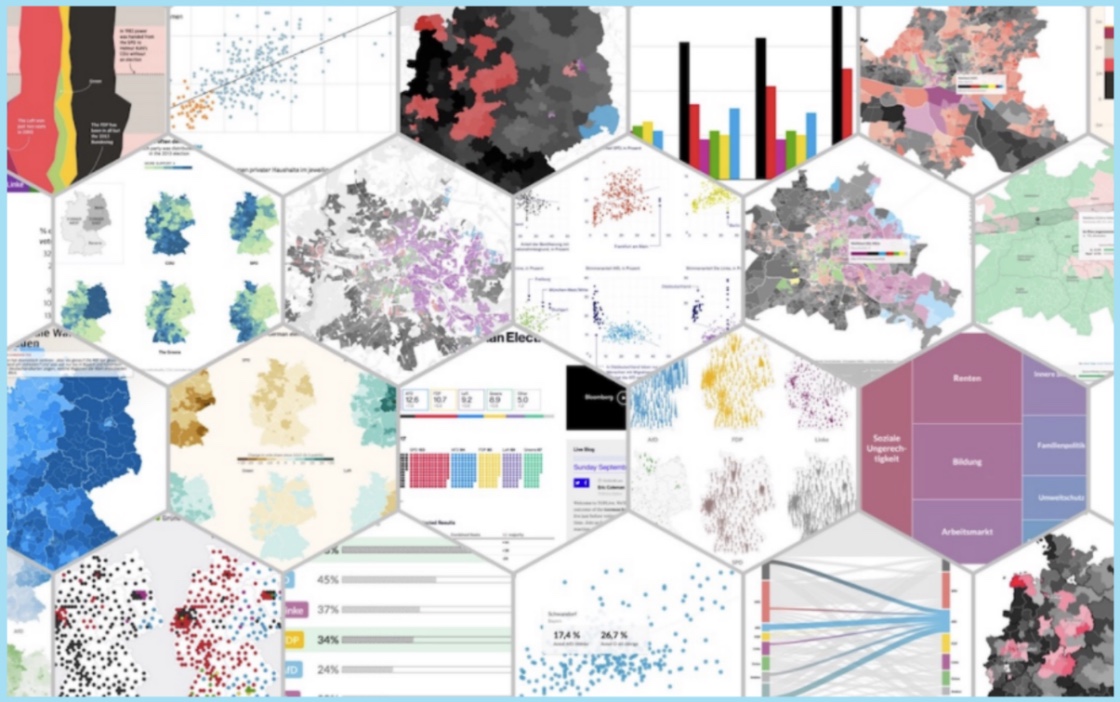 In their corporate blog, Karlsruhe-based tech company Echobot published insights on which German party was “the most digital” during the election campaign, meaning: Who talked a lot about which tech topic, and who was associated with it in which way on social media. Echobot’s infographics are absolutely worthwile, and the underlying tech is impressive. However, the post also proves that simple automated analysis just isn’t enough sometimes. Exhibit A: The digital policies of the CDU/CSU. The party ranks at #2 in Echobot’s charts and apparently has made broadband infrastructure a key mission. However, the CSU’s minister in charge up until the BTW, Alexander Dobrindt, was widely regarded as a miscast with a poor track record (1, 2).

A similar, but much more sophisticated project is Wahl 2Q17, realized by Truth & Beauty and supported by the Google News Lab. It’s all about keywords (or search strings) used before, during, and after the BTW. The dynamic visualizations are stunning. They also cause irritation and disbelief. It seems, for example, that a lot of people using the Google search engine on election day were primarily concerned with Angela Merkel’s age – and with her party affiliation (!). As for her contender, Martin Schulz, significant parts of the public were less interested in the man himself, and more eager to learn about his wife, Inge Schulz. Alexander Gauland, frontrunner of the radical right wing party AfD, engaged the attention of Google users with Nazi jargon (“we will hunt Angela Merkel”), which is understandable. His particular tie seemed almost equally important, though.

For an almost classic DDJ piece, Deutsche Welle investigated the secret funding of German political parties. A collection of stylish, partly interactive charts accompanied by a well written text reveal alarming facts: Companies/lobbyists are able to hide the large sums they donate without breaking any law. That is because they can conveniently split up the money into smaller portions. Those have to be reported only after 18 months — or not at all.
More insights include that the AfD heavily depends on donations at the moment, and that there is a club of “generous financiers” who frequently gives significant amounts of money to the parties they think represent their interests best. The DW piece also backs an assumption that is somewhat common sense: If a political project is dedicated to left ideas, there aren’t a lot of major donations, and certainly none by the usual suspects.
Disclosure: A member of the DW YDS team was involved in creating this story.

A fourth and final example of fine dataviz in context of the BTW is a post by Süddeutsche Zeitung. It provides insights into how the new Bundestag (German parliament) is composed in terms of its members. The infographic at its core is neatly arranged and fascinating to look at. The number one finding would be that Germany’s legislative body is now very male, rather old, and dominated by lawyers. 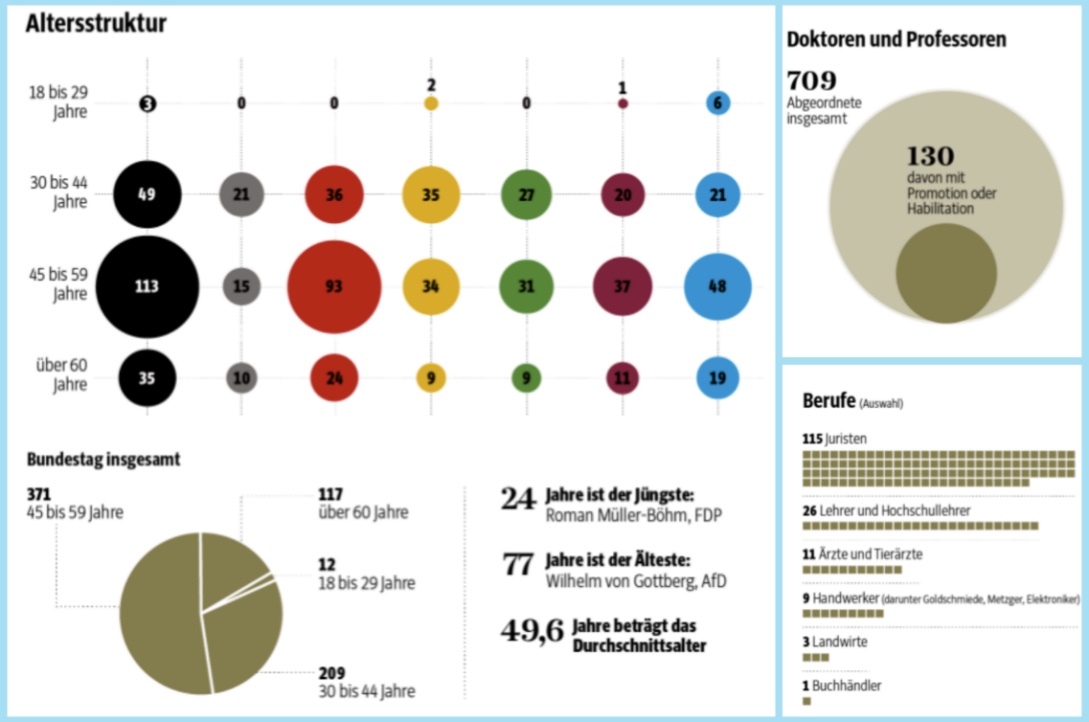 About the author : Alexander Plaum