The Art of Transforming Data into Great Stories

In case you live in a country where media is not frequently reporting about US-American politics, the race to the White House has started. The caucus in Iowa represented the kick-off for the upcoming weeks in which the official nominees will be selected. The Google News Lab used that as an opportunity to create simple visualizations that cover the upcoming elections by reflecting search entries.

The visualization in question addresses the candidate’s search ranking during the 7th Republican presidential debate. In a animated line chart the change in ranking is displayed over the duration of the debate. Are you wondering whether the animation allows you to draw conclusions about the winner of the primaries or even the upcoming president based on search queries?

You are not the only one raising this question. This visualization by Google is just another aspect of the variety of data that can be used for news coverage. However, the visualization lacks in transparency. Google in fact publishes the data and code for this visualization, but unfortunately, a link to this is not included in the actual visualization. You need to search for it yourself. With regards to this aspect: Come on Google, you can do better!

Music has the power to touch people. Why not honoring its power with a whole interactive webpage? The Swiss based company Interactive Things developed and created a “Galaxy of Covers”, which is devoted to the evaluation of the top 50 cover songs listed by the BBC.

The visual language chosen by Interactive Things is very clean. They adapted the solar system in order to display, how close the covered songs are to the original version. Thus, the original song corresponds with the position of the sun, whereas the covered songs are symbolically the planets orbiting it. By clicking on a solar system, more insights about the covered songs are provided: time, genre and also the speed and feeling of the song. In our opinion the shades of this visualization are not intuitive. But after having found the legend button on the top right, light is shed on the darkness of galaxies. Well done!

Who are the two million foreigners living in Switzerland?

Almost one year has passed since the Swiss referendum against mass immigration was held. Today the issue is still a topic of interest. Therefore, swissinfo.ch dedicated a data visualization to the question: Who are the two million foreigners living in Switzerland?

“Keep it simple but efficient” might have been the motto for the visualization. A ‘double’ donut chart was chosen to illustrate two things: For one, the share of immigrants according to their continent; and for another the distribution of countries. The user can simply hover over the donut chart in order to explore and compare. The visualization is limited in the degree of information. However, some aspects of what the visualization is not able to display, was simply added as text in the respective article. For instance, many children born to foreigners living in the Alpe State do not automatically gain the Swiss nationality. It is a smart move to not incorporate all facts in one visual at the expense of simplicity. Furthermore, we appreciate that not only the source of the data is stated but also a link to the code is provided – this is not the standard for relatively small visualization such as the present donut chart. 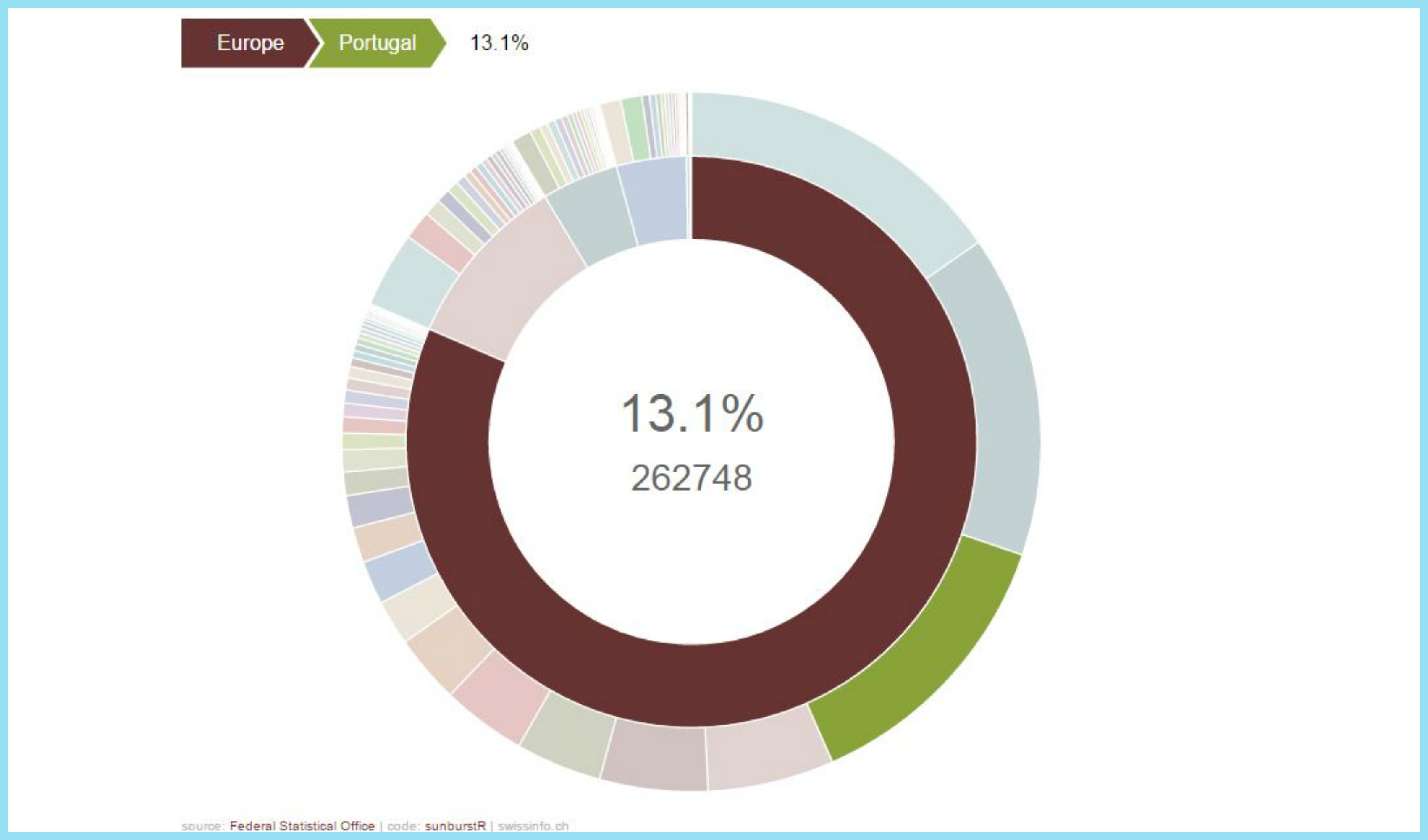