Sports are an infinite source of data with all its rankings, results tables and conditions. During the 2016 Summer Olympics in Rio, journalists, commentators and spectators will get head to head with that data live. But how do results and other metrics reach the displays of all the different stakeholders? The answer to this question lies in the Olympic Data Feed (ODF), the one source for all olympic live data. 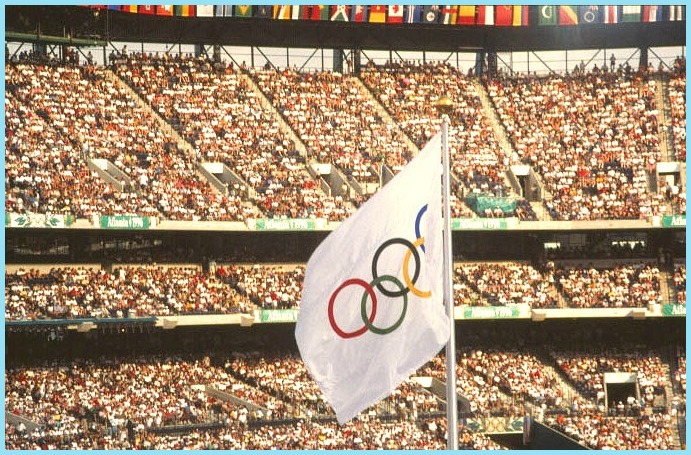 What is the ODF and how does it work?

On the Olympic Data Feed’s website the platform is described as a sort of messenger system, based on XML, to send sports information from the moment it is generated to a set of end-customers. The idea behind this is to have a unified set of messages valid for all sports and several different systems.

So in short, ODF is a platform where large amounts of live-data are bundled and supplied to business partners. In the case of the Olympics this platform is accessed by the media partners who want to provide their customers with (live) results and other data live in Rio or through their channels like live tickers, tv screens or on a website. 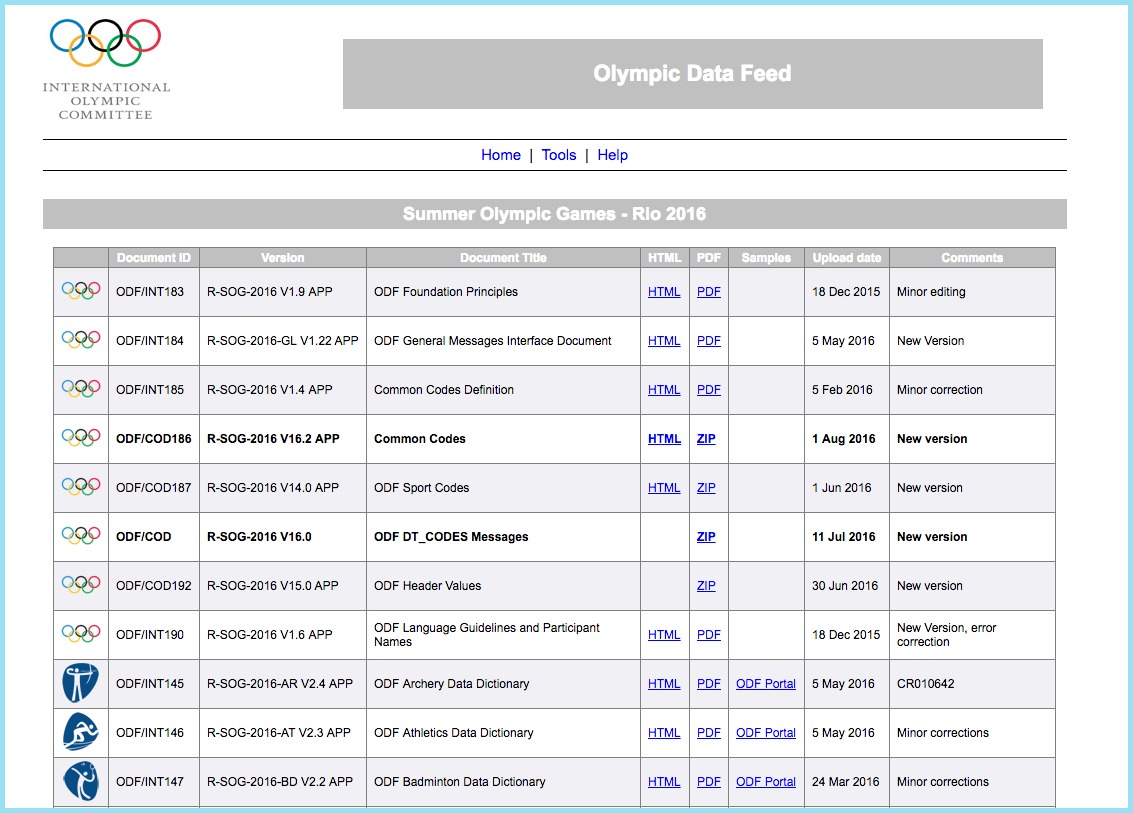 As you can imagine, the ODF is no #OpenData portal. #Rio2016, just like all previous Olympic Games, is fully in the hand of the International Olympic Committee (IOC) that controls the rights for this global mega sport event. Accordingly, the IOC is in charge and in control of communicating the results. And it does so under its own, strict conditions, using the Olympic Data Feed as the technical infrastructure to do this.

The ODF not only offers real life data, but also data about participants and sporting rules. Once you have access to the ODF, you can analyse the most current data as well as from past Olympic Games. Hence, the ODF is the key when it comes to Olympic data analysis and unsurprisingly it is not free to access for everyone. In contrary, the platform works as service for paying partners, such as media outlets that want to cover the Olympics through their own channels. Still, if you’re interested in how exactly the system works, it’s recommended to have a look at the website since the documentation is openly accessible.

Examples from the media 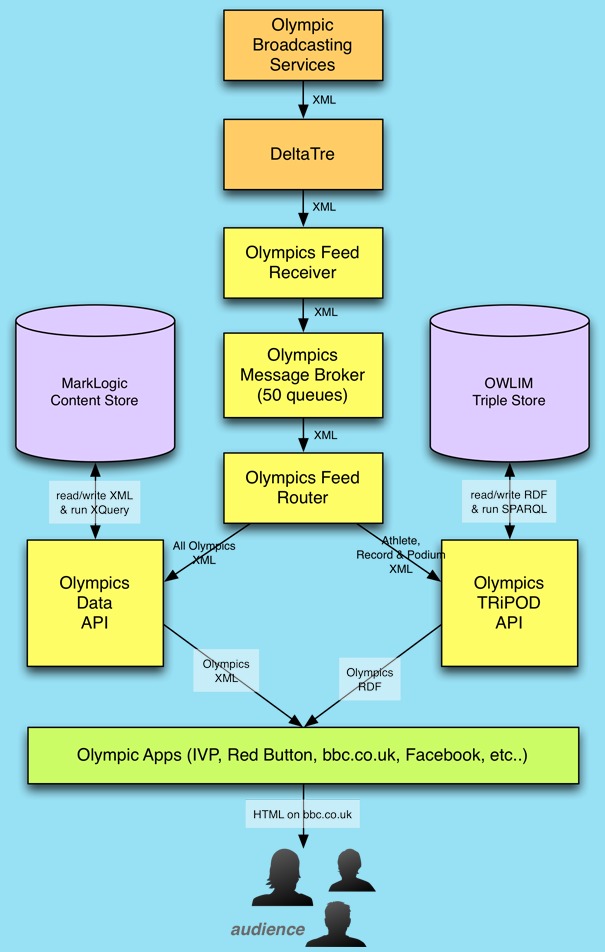 When the Olympic Games took place in London in 2012 the BBC set up a specialised team in order to prepare adequately the news coverage of the mega event Oliver Bartlett, Product Manager of the BBC Olympic Data Services, gave some insights about the preparation of the Games in this interview (2012) from the perspective of a broadcaster. In the blog post he described, what kind of information the BBC needed to process in order to ensure a comprehensive coverage of the Olympic Games. Even though Bartlett’s article is written straight to the point, it’s obvious from between the lines that the workload must have been immense. In addition, Bartlett’s then colleague David Rogers provided us with a more technical workflow in a different blog post. Unsurprisingly, Rogers stated right at the beginning of the post: „Twelve months ago, there were three of us in the new Olympic Data Team […]. We were tasked with providing data for the BBC’s Olympics 2012 project: stats, events, results… Today, we are a team of 20, we have built five applications, provide 174 endpoints, manage 50 message queues and support ten separate BBC Olympic products – from the sport website to the Interactive Video Player.“

Experiences from across the ocean

The New York Times also reported about the struggles and challenges with Olympic Data it had over the years. Former assistant editor of the Interactive News Team Jacqui Maher felt the need to share her teams’ experience with the 2012 London Games when they started preparations for the 2014 Winter Games in Sochi. The publication date of the article already indicated the demanding organizational preparations newsrooms are facing when they are keen to deliver live results and other Olympic stats: It was published 10 months before the actual event. Maher lead the reader through the process of developing and gave examples of different categories the feed is able to describe, for instance: „A ‘participant’ message lists athletes: first and last name, country, date of birth, sports played, etc. The start and end times of each unit of competition are gathered in a ‘schedule’ message for each sport. Once the games are underway, results at every stage of competition are sent in a few different types of messages: unit, phase and cumulative results, pool standings, brackets, and medallists. Tying or breaking World and Olympic records triggers ‘record’ messages in the feed, and these describe the athlete who set the new record and info on the previous one.“ 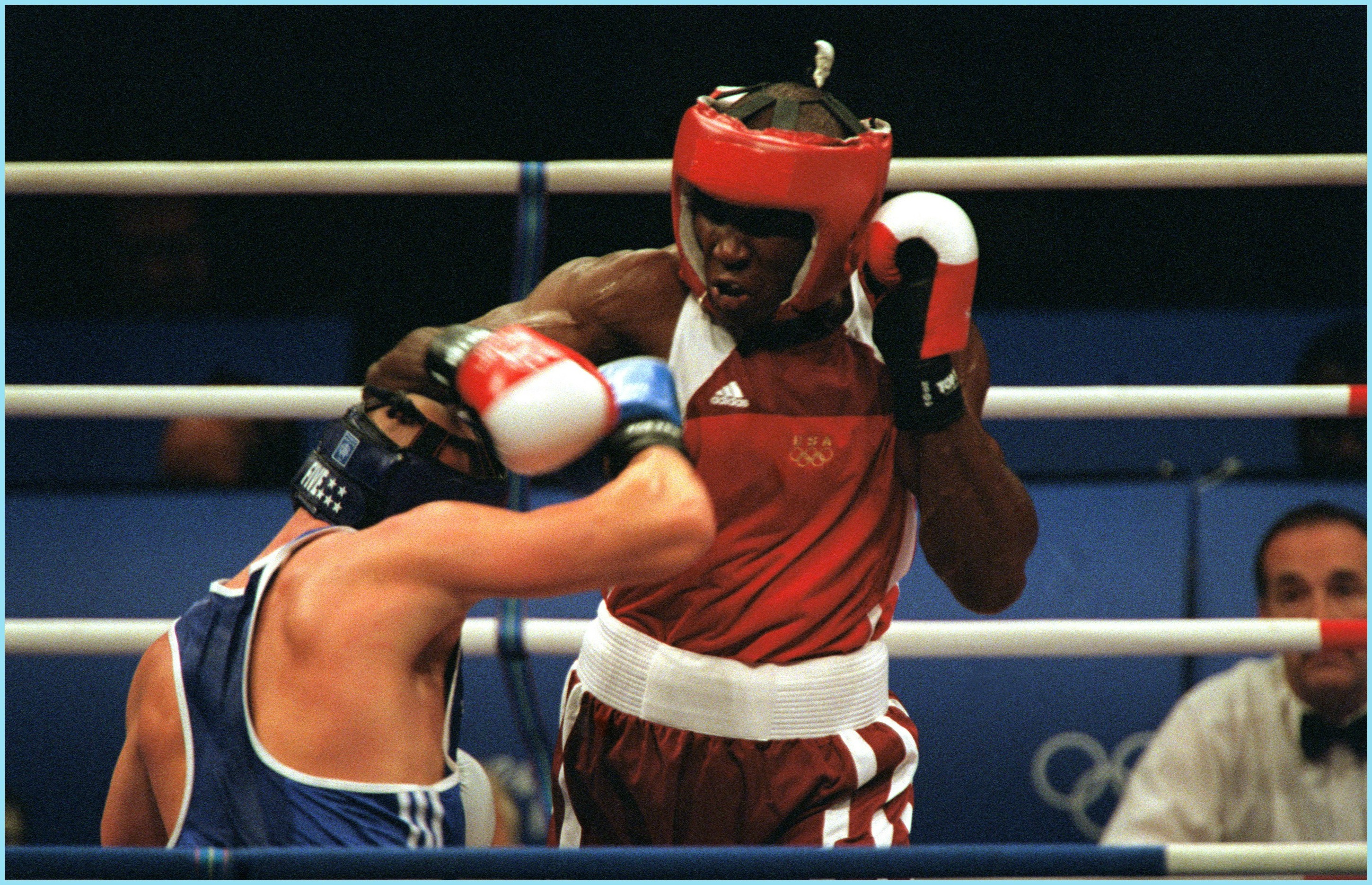 Maher shares the same judgment as the members of the BBC Olympic Data Services: Covering the Olympic Games is data-wise a technical challenge. „When I signed on to work on the Winter Games taking place in Sochi, Russia, in February 2014, I was still feeling battle-scarred by the London experience.“ Maher recapped her feelings.

Who’s behind the technical infrastructure?

Atos, a European IT service provider, has been the official IT partner for the Olympics since 2001. Naturally, Atos consider themselves a key player in project Olympia; which also puts the pressure on them to keep up with the pace: As quick as technology is moving in media, as quick does ATOS need to adjust to trends. This is why the Rio Games will see the first cloud-computing solutions ever in this area. ” #Rio2016 will be Games of technology firsts.“

In order to ensure a seamless functioning IT a Technology Operations Centre (TOC) has been set up. The TOC can be understood as the Control and Command Center for Technology, supervising all 144 Olympic competition and non-competition venues, distributing the results from all the Olympic and Paralympic sports competitions to the world’s media in real time.

The longer an outsider tries to dig deeper into the complexity of Olympic Data, the more he or she will note that this is a science on its own. No wonder even theses are written about the topic. However, at the core of all this Technology are still the Olympic Games, focusing on the athletes, competing against each other, writing sports history and fascinating millions of fans. Results, statistics and rankings need to be presented as graspable numbers for a global audience. When we switch on the Olympic Games, we might not think about what is going on behind the scenes. But it is a huge data industry. But you don’t have to worry about this – just enjoy the games.