Three plus one great examples of data visualisation from #Rio2016

Its just been a few days since the XXXI. Olympic Games in Rio de Janeiro have closed with a spectacular show in the world famous Maracanã Stadium. 306 competitions were fought out, 974 Medals were rewarded (307 Gold, 307 Silver and 360 Bronze) among some 11500 odd athletes.

Just this short intro already shows what makes these sports events very interesting from our point of view: The data within. We already touched on that topic at the beginning of the Games that made clear that all this data is very well gathered, but not openly available to everyone.

Among those who do have access are of course numerous media companies and many of them try to make use of this trove of of information. But while some just publish the main figures (e.g. medal tables), others use the data to create wonderful pieces of data-visualization to bring the Olympics and the competitions closer to their audience. So we thought, we would nominate our top three dataviz pieces from around the web.

What is it?
The Washington Post’s Data team gathered all kinds of Olympic equipment, from a simple golfball to a tennis racket to a sport stadium, and compared them in size to each other. They visually placed all the items next to each other in a scrollable interface, allowing you to go back and forth between the items, seeing how the items grow bigger (or get smaller).
In order to make it more comprehensible, they also added some daily items such as a soda cans or jumbo jets for you to easier grasp the dimensions.

Why do we love it?
We love it because its a simple thing covering a complex issue. Comparing sizes without being able to hold things next to each other is difficult. Yet the Washington Post Team did a great job in transforming this into a nice dataviz that makes you want to use it over and over. Furthermore it gets the message across and brings you a lot closer to the Olympic world, without really going to Brazil.

And this is not the only great piece of data-work the team did. You should really check out their collection of Olympic Graphics.

Winning the dataviz silver medal is … The Financial Times’ “Visual analysis of Phelps, Biles and Bolt”

What is it?
The Financial Times’ ddj-expert John Burn-Murdoch took a closer look at three of the top athletes in Rio, the swimmer Michael Phelps, the sprinter Usain Bolt and the gymnast Simone Biles. All three won several Gold Medals and are (already – Biles ist ‘just’ 19) considered among the all-time top athletes. In his analysis Burn-Murdoch compared all three of them to their predecessors from the last 100 years of Olympic competition and found some extraordinary insights. 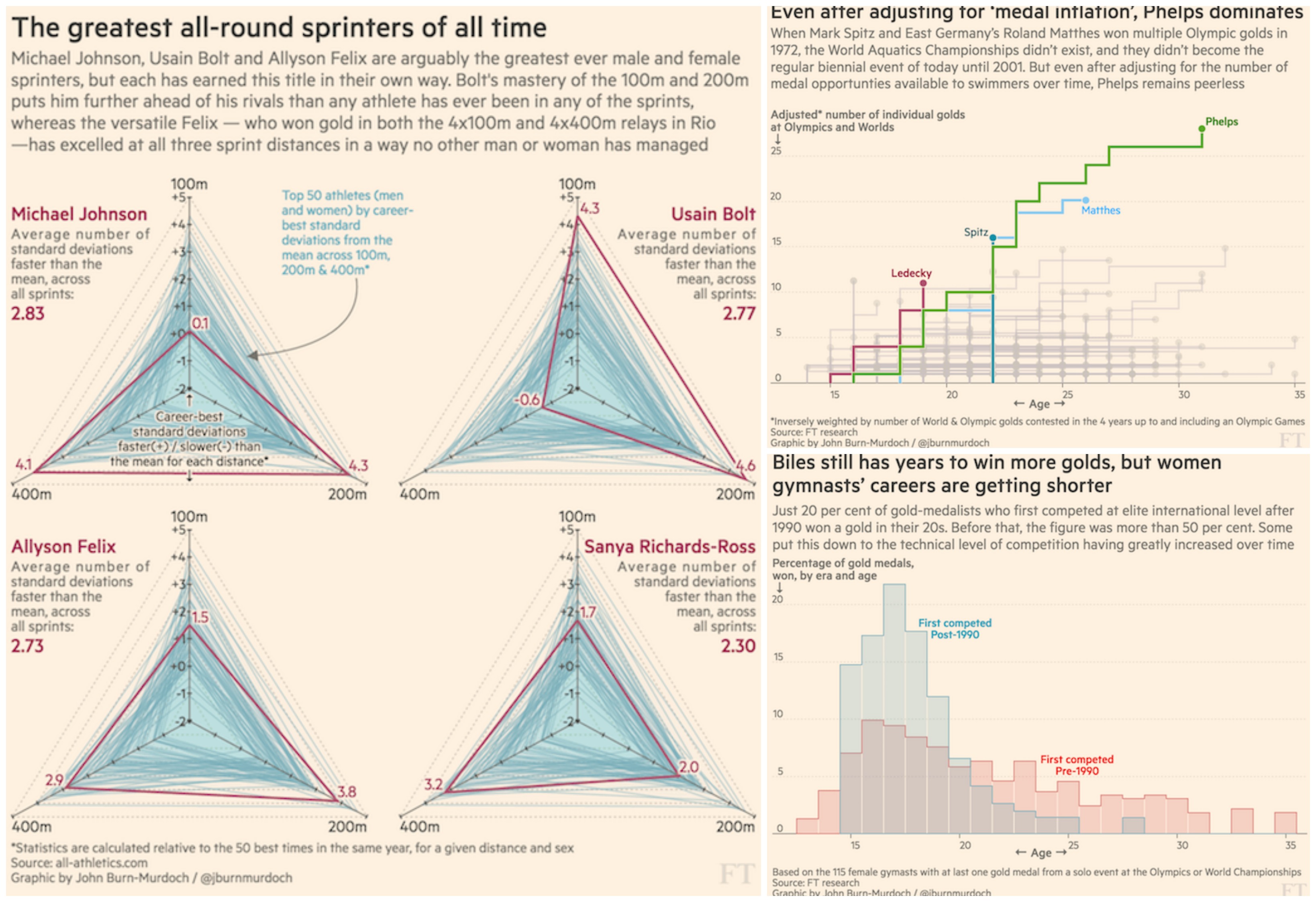 Why do we love it?
We love this because first of all it looks pretty cool but then also because it puts the results of these athletes into context. Burn-Murdoch not only shows how many medals Phelps, Bolt and Biles won, but he also takes into account the changes within the Olympics across the years (like more competitions, so more chances to win extra medals). Furthermore, he takes a closer look at some of the defining factors in these sports, like the age of the athletes. While Phelps is already past his athletic peak, he still won across much younger competitors. Biles on the other hand still has a few years to go and more chances to win more medals. The analysis shows however that the performance-time-span of female gymnasts has been getting shorter. So overall a great piece of ddj and dataviz and also not the only one done by FT – you can find a few more among their regular Olympic coverage.

The dataviz gold medal, and first place, clearly goes to … The New York Times’ whole interactive coverage on the Olympics.

What is it?
The New York Times has produced so many pieces of great dataviz that it’s hard to pick THE one out of the whole collection. A lot of people liked the 120 years of sprinting history, comparing Usain Bolt’s 100m sprint across the ages, showing just by how many seconds and meters he beat his predecessors, only loosing to his younger self.

But we’ve decided for another one that is slightly less complex, but even the more fascinating: “Olympic Races, in Your Neighborhood”. The author chose a gaming-approach giving you a feel for just how fast the different athletes are – by providing you with comparisons in length and time from your neighbourhood. 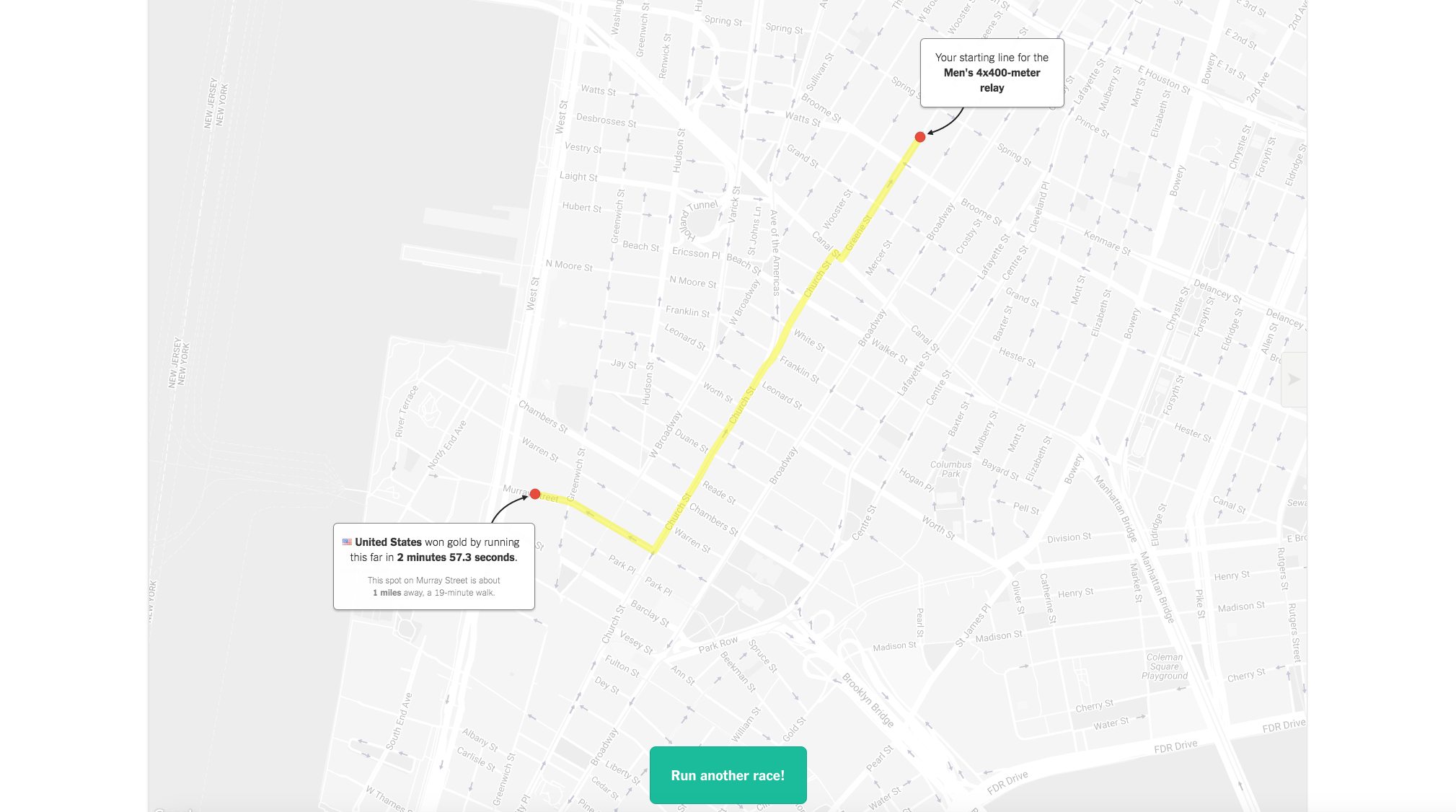 Why do we love it?
We love this because it can’t get any more personal. You know the streets in your neighbourhood and you know how long it takes to get from A to B. By letting you choose the starting point and giving you a direct comparison to an Olympic athlete, you basically feel the pressure of the competition. Using a map and an open search field as well as offering you all kinds of different athletic sports is just brilliant. Just like many more of the stories in the NYT set. So check it out – it’s absolutely worth it.

The plus one
There is no more medals to give, but we do have an honorary mention, we would like to add and that is the alternative Medal Table by Google. Based on Olympic search results, they have added some new ranking categories worth checking out, which is part of their Olympic trend section. Also worth a look, if you’re into data-analysis and dataviz.

Do you agree with our selection or are you of different opinion? What were your favourite interactive stories from the Olympics – tell us in the comments.
0
0
0
1
0
DataViz, DDJ, Olympics, Rio2016