Responsive web design is on the rise. One of the tools in order to create responsive charts and maps is Tableau. The program offers some paid products, such as Tableau Desktop and Tableau Server, but in the following we tested Tableau Public, which you can download for free. 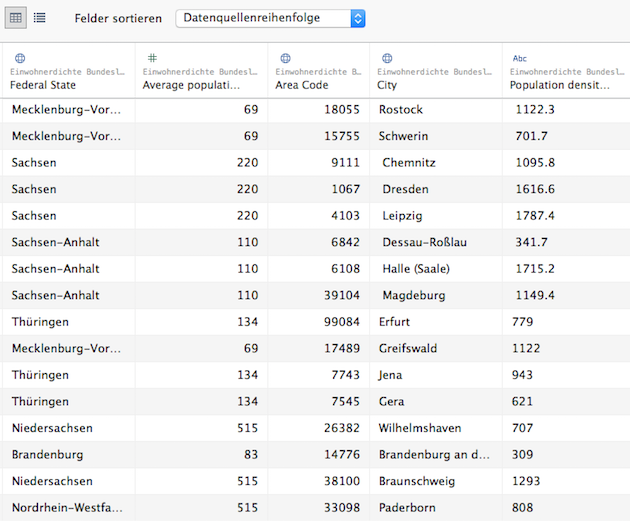 Features and values chosen for the map

First of all, as usual, you need to upload the data you want to visualize. The tool recognizes various file types such as csv, xls and txt. In order to exemplify the functions of Tableau, I created an Excel sheet that contains data of the population density in Germany. Since Germany is divided in several federal states, I organized the table by distinguishing among them. According features were: the average population density in square kilometer of single federal states and of single (big) cities within the federal states.

Tableau usually analyzes the data automatically and classifies it as number, decimal, date (time), string or geographical feature, such as state, ZIP-Code, etc. However, it is possible to change that classification manually in case it is flawed. You can also change the name of the items but you cannot alter the single items within the table. Once your data is clean, you can proceed with the visualization of your data. There are different types of formats you can choose from, for example a bar chart, scatter plot, a pie chart and a few others. 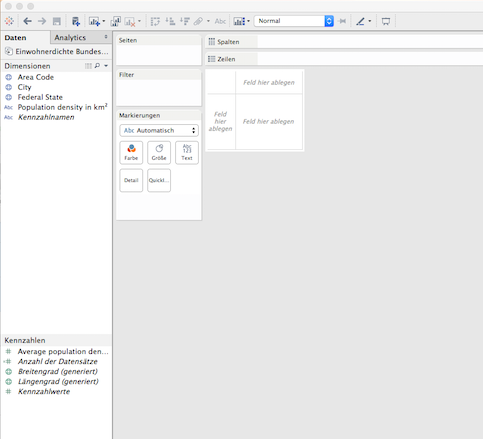 Overview about the Tableau dashboard. No coding but dragging, dropping and button-pushing is expected.

What is my specific plan? I aim to display the population density in Germany. Therefore, I pick a “filled” map – the Tableau equivalent to a choropleth map. More specifically, I want to show the population density of the federal states and elected cities at the same time. Having a clear picture of the outcome of this project in my mind, I started dragging the features longitude and latitude from the left bar and dropping them into columns and rows. After dragging also the unities federal state and city both to the button details, I can identify Germany on the map.

In order to show the dispersion of the population density, I drag the unit population density to the button size; Tableau adjusts the dots in the map accordingly. All information a user adds to details will be displayed when he or she browses over the dot. The user can delete the type of information shown at any time by clicking remove. Within the map you can not only zoom in and out to the different places, but also search for a specific place. However, when I try to change the display mode from automatic into filled map, the first real deficit of the tool becomes evident: The filled map is not available – at least not for me.

Everyone deserves a 2nd chance

Generally speaking, Tableau offers some very appealing visualizations. For maps, two options are provided: the filled map and the symbol map. For charts and diagrams there are even a lot more. Creating a diagram works very similar to a map. In order to do so, it is also necessary to upload and adjust the necessary data. 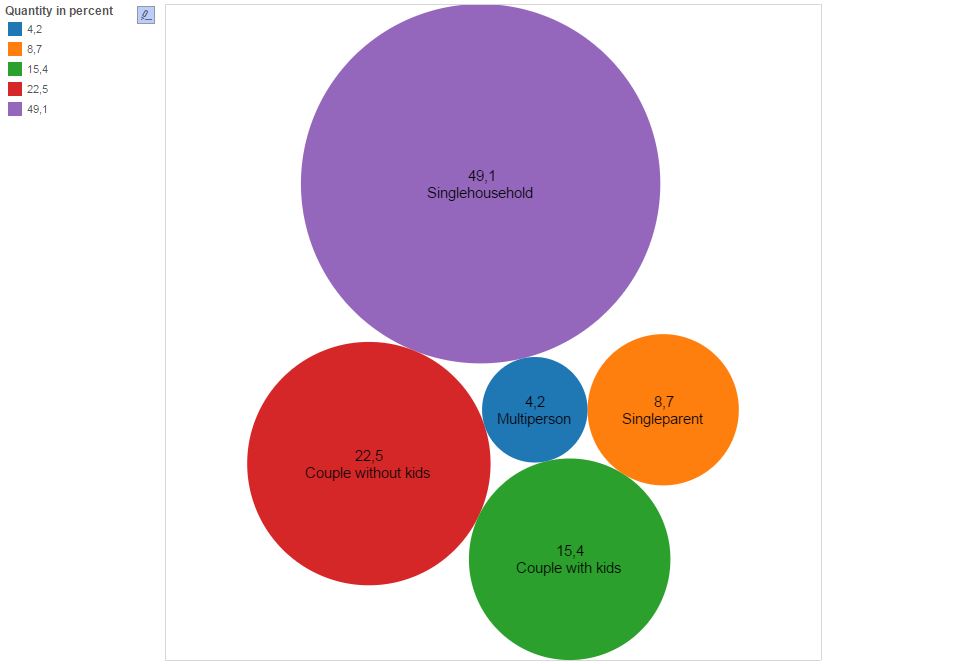 Different types of households in Berlin

Let’s have a look how it works on a real example. I decided to give an overview of the different types of households in the German capital Berlin. I dragged the unit quantity in numbers to the size section and the quantity in percent and type of household-unity to the text section. I also attributed the quantity in percent to the color-button. In the worksheet section you can choose between the different types of charts, if you are not sure, there is always the option to run the visualization in the automatic-modus, where the tool chooses for you. I would recommend doing so, if you do not have that much experience with Tableau. You can also edit the written text, change its font and size, the colors within the diagram and then save it.
Whenever you finish a diagram or a map, at least in the public version, it will appear on your profile of the Tableau website and you can share the result or embed it with the code built by Tableau.


What we think about it

If you do not have that much experience with data visualization, Tableau is quite challenging. It is definitely not self-explanatory and you need to have patience. Though there are some tutorials online, they mostly concentrate on US-data visualization, so if you’d like to visualize data from e.g. Europe or Asia, it is not always that helpful. However, in case you need help, there is an online support forum, where you can receive support.

About the author : Azade Pesmen